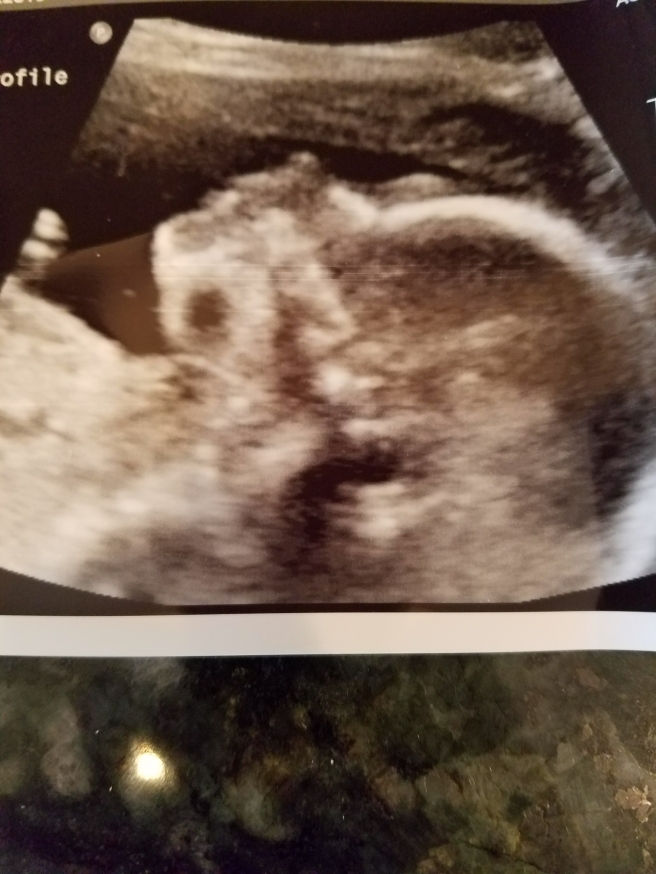 As you all know by now, the little munchkin revealed herself to be a girl, with about as little doubt as there can be from an ultrasound. The tech kept her prediction within professional bounds – AKA “no guarantees” – but she followed that with, “there is nothing there which leads me to believe otherwise”. So we’re feeling pretty convinced!

The ultrasound had originally been scheduled for 8:30 in the morning, but they called the day before and moved it to 2:45 in the afternoon. Before the appointment, we purchased both blue and pink decorations for the little party we were having afterwards, to prepare for either outcome. I kept the receipt to return whichever color we didn’t need. Ultimately, the time switch was not a big problem, because Kyle and I had both taken the whole day off, but boy oh boy was it hard to wait all day! My anxiety was through the roof, and I even broke down and cried into my lunch for absolutely no reason, other than the fact that the day was really emotionally charged.

I was really, really hoping for a girl, which was part of the anxiety ahead of the appointment. But most of the anxiety came from hoping all the parts and guts were there. I immediately felt better as the ultrasound tech started looking around, because I saw all kinds of baby parts (my biggest relief came when we saw the brain)! I was also nervous about the placement of the placenta, since I’m hoping to have a vaginal birth this time around too, and finding out that the placenta was blocking the cervix would have ruined that plan right away. BUT! All the parts and guts were there, the placenta is at the back of my uterus, and we’re having a girl! So everything just worked out about as perfectly as one could hope.

The appointment with the doctor following the ultrasound was easy-peasy. We met with a different doctor in the practice, and liked him very much. It was nice to meet another provider, since you never know who will be on duty when baby makes her debut. All my vitals were good, and the doctor had nothing interesting to say to me because, well, everything was normal. Hooray!

As I mentioned on Monday, I was expecting a very large weight gain, but it turns out that I only gained about 5 lbs, which is just over a pound a week! Right on track! That doesn’t change the fact that I’m seeing general expansion all over my body in the mirror, and I’m not loving that image. But like I said before, I’m just so stinking happy about this little baby that seeing this puffy version of Carolyn come back isn’t really the end of the world.

Today I woke up feeling very strange. It almost seems like yesterday didn’t happen and I can’t believe my luck. I keep pinching myself to remind myself it isn’t a dream.

Speaking of dreams, I had nightmares last night which disrupted my sleep. I think they stem from some newly awakened emotional turbulence. Like with Lewis, finding out the sex of the baby has changed the game for me. It feels more real, I feel like I know baby in a different way, and it feels like I have so much left to do, with very little time left. Everything just hit me in the heart yesterday, and I feel very unsettled.

Dealing with this strange mixture of joy and panic will probably take a few days. I am sure that planning and preparing, working on finances, and simply living with the news for a while will all help me settle back into my rhythm. But until then, I’m a bit frenzied and scattered.

P.S. I ordered sooooo many baby girl clothes in the throes of my elation after our little gender reveal party yesterday. That was so. damn. fun. I can’t wait until they all arrive!