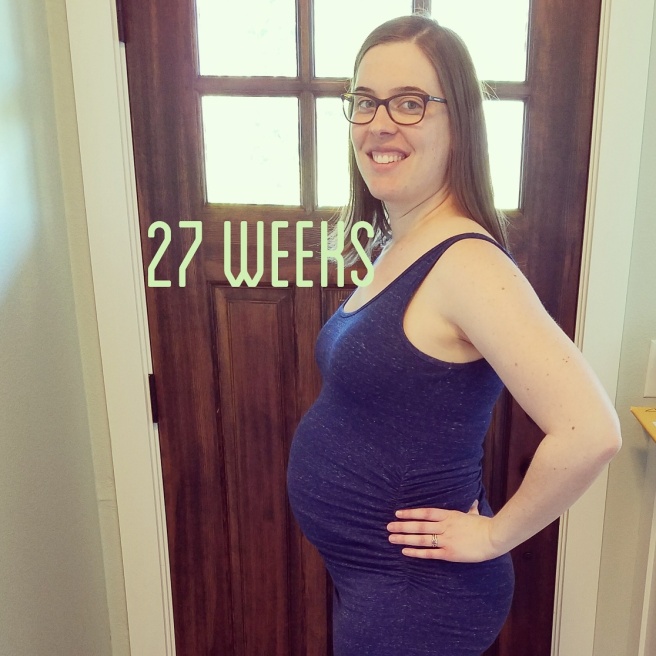 Well hello there, baby bump in the 90 degree weather. Thank goodness for AC! Also, Baby and I have made it to the 3rd trimester! Bam!

According to the weekly emails, there is a good chance that Baby Girl’s lungs would be able to function (with medical help) if she were born right this minute. I have been waiting for that milestone to pop up! I remember feeling great relief at that news when I was pregnant with Lewis, and I knew I’d feel the same way this time.

With all the weird stuff that my body has been doing lately, I have had a heightened sense of concern about Baby Girl’s well-being. I find myself constantly worried about “reduced fetal movement” in a way that I never was with Lewis. There are days when she doesn’t move much, or perhaps I don’t notice it because I’m too busy? Either way, she used to be on the move non-stop, so that whole “reduced” term means something different when it comes to this little munchkin, and I find myself questioning how many kicks are “enough” kicks.

In order to cope with my concern and not panic unnecessarily, I have learned to really pay attention to the wild moments as a source of reassurance. With Lewis, I never really got on board with the kicks – I mostly found them distracting and annoying. While I still feel that way this time around, I am making myself appreciate them at the same time. Whenever Baby Girl is whacking and thumping my belly, I allow myself to fall totally into the distraction that those moments bring and find peace there next to the annoyance.

I’ve been feeling a mix of positive and negative sensations this week. That feels pretty normal for this stage of pregnancy, so I suppose I don’t have much to complain about. Hooray! But even so, I’ll summarize below.

I noticed this week that some of my early-pregnancy symptoms went bye-bye without much fanfare. To the point that I hardly even noticed they were gone, and couldn’t tell you when they left. The most notable departures are the gagging-while-brushing-my-teeth phenomenon and the acne/dry skin debacle. I do not miss those at all!

My cravings haven’t been terribly off the wall either. Cookies have pushed themselves to the top of the list, which is reminiscent of my pregnancy with Lewis. I have also really been into toast with cheese and cucumbers. But mostly I’m back on the sweets bandwagon, which makes me extra nervous for that glucose screening I have next week. It would be very hard to resist cookies. Crossing fingers (for many reasons) that I don’t have gestational diabetes!

My heart monitor results came back normal last week, and I went several days in a row last week without any “episodes” (short-hand for my dizziness/shortness of breath spells). But then I had 1-2 each day Friday through Sunday. So I guess this strange little problem plans to persist, but at least it isn’t debilitating and/or constant. And having experienced it as long as I have now, it isn’t nearly as scary as it first was. It is nice that the acute panic is gone.

I do have an appointment next week with a perinatologist for a consult about my “episodes”. This seems like another over-reaction to me, but I am just going to continue to be dutiful and follow all my doctor’s instructions. She said go, so I will go.

My biggest discomfort at the moment is that I am tired. Oh lordy, am I ever tired. Even my best nights of sleep are only half-decent, and I find myself dragging by mid afternoon. I wish that life allowed for daily naps, but alas! That is not how things work. Last night I fell asleep at 8pm while Kyle handled bedtime until 9:45 with Lewis (wtf, kid). I just couldn’t stay awake! After he finally went down, the kid slept like crap the rest of the night too, and I was up with him for ages since then Kyle was the one who couldn’t wake up. So my early bedtime did literally nothing to help me recover from the excessive fatigue I was feeling yesterday, and I’ve been tired from the moment I woke up this morning.

Oh well. I’ve been more tired at other times in my life. And I’ll be more tired again later, I’m sure. I did get my butt out of bed early enough this morning to blow-dry and straighten my hair (a truly rare feat!), in the hopes that it would make me feel fabulous and negate the fatigue. No such luck. I do look fabulous, but I’m still tired!

With the warm weather that has come to PDX in the last few days, I have been upping my game with water consumption to try to keep braxton hicks contractions to a minimum. I have noticed a marked increase in the number of contractions I’ve been having lately, and even though I know they’re harmless and normal, it is nice to minimize them as much as possible. They are a little uncomfortable, after all. (Of course, the trade-off is that I contract less, but have to pee way more. So…just a different kind of discomfort!)

Other than the unexplained crappy night of sleep last night, Lewis is amazing. Now that we’ve gotten over some of the big hurdles we were dealing with the past month-ish with him, I am finding that I’m quite enjoying this phase of Lewis’ little life. It is fun to be able to talk with him about everything we’re doing, get his opinions, and get through things together instead of guessing what he is thinking. He has even started telling jokes! My little buddy has a silly sense of humor, and I love it!

We have a fun time laughing together, he loves to play outside, still wants to “do it self” all the time (and is getting better at actually doing things himself!), loves to build and “crush” stuff, and is obsessed with anything that has a motor in it (literally anything). He has also been getting very good at remembering things – especially people’s names – and gets excited about seeing people and doing things that he is familiar with.

For the most part, we’re in a phase with Lewis where he is fairly compliant. He makes demands all the time, naturally, but if we say “no” he tends to accept it as long as we give him a reason. He usually responds to a rejection + explanation with a little, “oh. okay!” and then just moves on with his life. I hope this lasts forever. This is nice.

One thing he does that drives me a little batty is that he will repeat the same thing over and over again until you respond. He basically refuses to be ignored. And he has no limit to his patience. He will literally repeat, “mommy look! an airplane!” 7 million times until you say, “wow Lewis, that’s a cool airplane”. Most of the time, I’m totally in on toddler conversations. But sometimes, I am in the middle of something else that requires my attention and it is a bit on the annoying side. Oh well. Toddlers are funny creatures!