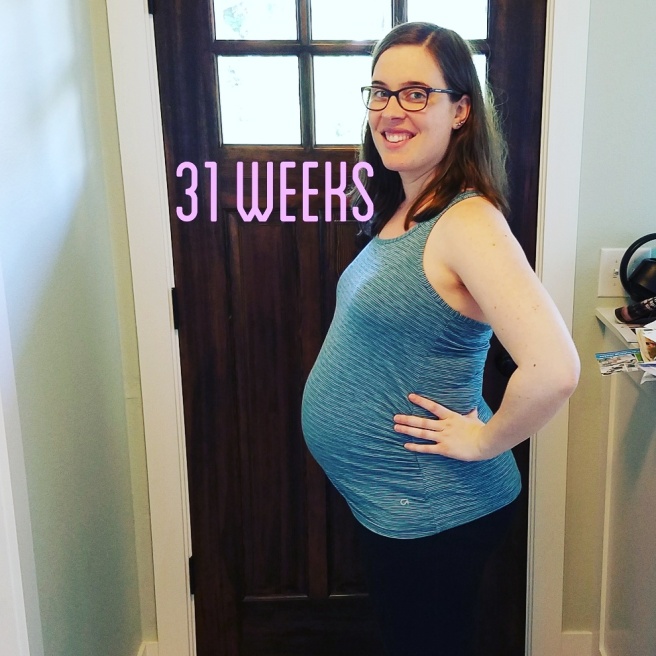 So happy to be able to share another weekly picture, even if it is of me looking huge, fat, tired, and unkempt. Keep ’em coming, baby! Stay in there!

Not much to report on growth this week, according to the weekly emails. Baby has fattened up a little more, and should be doing more of that in the coming weeks. The fatter this kiddo gets, the happier I am! Well, I shouldn’t say that. What I really mean is: The longer this incubator keeps baby in, the bigger and stronger she gets, and that thrills me!

Baby Girl has had some really wild moments recently, even disturbing my sleep at times. Normally I am not awakened or kept awake by baby kicks for very long, but there have definitely been a few nights this week where I was bothered by this little girl’s acrobatics. By last check at the hospital on Thursday, she was head-down. With all the moving I’ve been feeling, it will be interesting to see if she still is by my ultrasound next Monday. I’ve still been noticing hiccups down low recently, so I suspect that as of last night at least, she is still head down.

The list of “top contenders” for Baby’s name doubled in length this week from one to two. One of the names doesn’t have an L in it, which we thought was a requirement for us to like a name, but it turns out we may be a little more flexible on that “rule” than we thought! The tricky part now is that neither Kyle nor I can decide which of the top contenders is our favorite. Yikes!

I’m doing ok. I haven’t been dizzy nearly as often this week, but these pesky contractions are really making things difficult. Kyle is very attentive, making sure I’m taking it easy, and being home where I can take it easy definitely helps. It doesn’t take much activity for me to notice an increase in intensity and frequency of my contractions, so it really does feel important to be a couch potato (sigh…). Even sweet Lewis has picked up on what is happening and asks me to sit on the couch if I’m up too long. Smart, observant kid!

On top of the contractions, sleeping at night has remained a bit rough. I’ve turned into quite a good napper, when I can find the time (I slept for over 2 hours yesterday while Lewis napped!), but night time is proving more difficult even when Baby Girl stops wiggling. I can’t even blame it on my bladder, surprisingly. I just still can’t seem to get into a deep sleep. It always feels shallow and like I’m half-aware that I’m sleeping. I’ll keep trying not to complain about this too much though, because I know that this sleep is still better than I’ll be getting after Baby Girl arrives.

Speaking of her arrival, my former L&D mother said that based upon the test results from our hospital visit last week, she thinks I have a minimum of 4-5 weeks left. She also said that there is absolutely no reason why I couldn’t make it to the end. That felt like super comforting news, even if there are no guarantees in pregnancy. I’d really, really like to make it to full-term (39 weeks) just to be absolutely certain Baby Girl has “baked” enough. But 4-5 weeks puts me at about 36 weeks, which is a good minimum goal in my mind. As far as I understand, 36 weeks gives a baby a great chance of survival without deficits, which sounds very appealing. So that’s my goal! Minimum of 36 weeks, but shooting for 39 weeks. Come on, uterus! Behave!

Just in case my uterus doesn’t behave, I have packed the hospital bag (except for a few last-minute things we’ll pack when it is go-time). The superstitious side of me is very satisfied with my decision to do this, because now that I’m prepared to “go” early, surely I won’t “go” early. If you prepare for the worst, then the worst won’t happen!

Mr. Lewis seems to be having a growth spurt. Or at least that’s the current working theory. He has been very moody, very tired, and very clingy. And all of that following a few days of intense calorie intake. We weighed him yesterday morning on an empty stomach, and he tipped the scales at 26.5 lbs! And his already-too-short pants and shirts were so bad yesterday that Kyle demanded that we put them away officially in favor of the next size. This does, of course, mean that his pants are now falling off, but they are long enough. And hopefully this little growth spurt helps a bit with his lack of girth!

Our alternative theory to explain kiddo’s moodiness is that he is still recovering from the trauma of last Thursday’s hospital visit and his concern about me. This is a viable theory because his clinginess is really only in regards to me. My lord! He will not leave me in peace and no one – absolutely no one – else is good enough for him. If I want to leave him with Kyle, I have to trick him or bribe him or talk Daddy up for 10 minutes before I can sneak out. And he wakes up at night/in the morning screaming, “I WANT MY MOMMMMMMYYYYYYY”. Phew. It’s exhausting!

But kiddo is still sweet, and kind, and smart, and funny, like always! And Kyle and I are really enjoying this stage of his development despite the weird behavior. I met up with some moms this weekend and one of them, who has a 7 year old, said something that really resonated: “So far, every age is my new favorite age!”