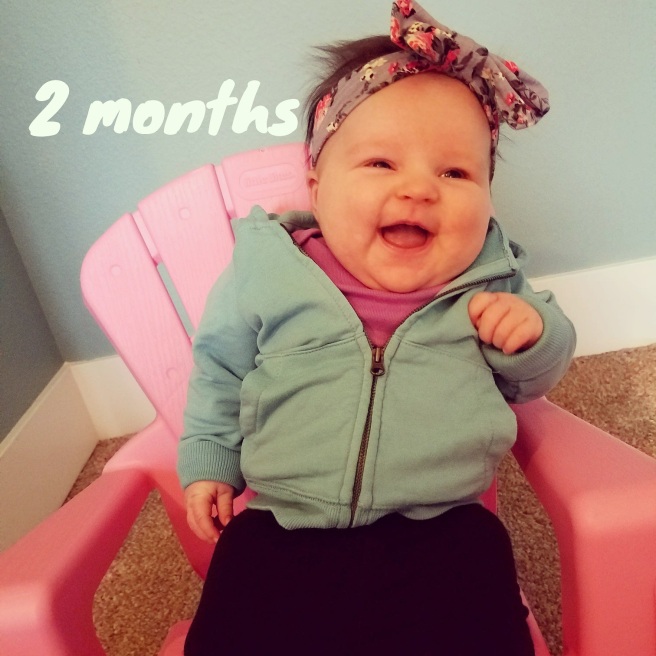 Here’s my sweet angel at 2 months old. Can you believe it has been two months? I sure can’t. I feel like I know her so well now, and there’s just no way that you can get to know someone that well in just two short months. Someone must have been counting wrong!

We’ve been tracking Ellen’s sleep to try to detect patterns, as I mentioned last week, and so far her middle-of-the-day sleeping is still totally random and unpredictable. Although, as I mentioned, I can see it coming on even if her scheduling/spacing isn’t regular. What has emerged from tracking is that she falls asleep for a short snooze about 1 hour after she wakes up for the day, and she is awake for 1.5 to 2 hours before bedtime. And bedtime has arrived at a set time, conveniently landing right around the same time Lewis goes to bed. 7pm-ish every night, Ellen melts down and it is time for bed. I feel pretty lucky that both kids are on similar schedules. Imagine if one was an early riser and the other was a night owl! Yikes!

Ellen’s night time sleep is mostly predictable now, too. She usually goes 5 to 6.5 hours for her first stretch and then does 2 hour stretches after that until morning. She’s doing great in her crib, and I’m pretty pleased with her progression. However, some nights deviate from the pattern, and that’s less awesome. The past two nights have had shorter stretches from start to finish, and I’m pretty exhausted. But it is still better than the very first weeks, so I’m doing alright!

We’re on the last few diapers of her first size 2 box, which will also be her last size 2 box. She has been growing so quickly (we’ll find out just how quickly at her 2 month checkup on Wednesday) that she grew out of size 2 in less than a month. In addition to the obvious squeezing and jamming into them, she’s been blowing out of them regularly, which is the ultimate indicator – those diapers are too small!

I hold out hope that she’ll be slowing down soon, though. With her eating spacing out during the day and at night, it feels unlikely that she’d continue to grow at this rate. If she does continue at this pace, she’ll be in 18 month size clothes by the time she’s 6 months old. We’re already into 9 month size in some brands (6 months in most – but barely fitting in those!).

Besides being huge and squishy, Ellen is balding at a rapid rate. Her beautiful, long, dark hair is falling out! Lewis lost all of his newborn hair, too, but it didn’t bug me because he was a boy and short hair was in the plans anyway. For Ellen, I had grand visions of pigtails being right around the corner because she started out with such long hair, and I got rather attached to that idea. She does still have some left, and I suppose there is no telling for sure whether she’ll lose it all or not until more time passes, but it is definitely thinner. And what is growing in to replace the bald spots looks much lighter, so I suspect that she will ultimately lose all the original dark hair and have it replaced by the lighter shade. Saaaaaad!

That’s the update on baby, but what about postpartum mama? Well, I have lost 4.5 lbs in the last month! 38.5 lbs overall since getting sent to the hospital for induction. At first, I was down on myself for only losing 4.5 lbs in the last month, but then I mentally slapped myself. 4.5 lbs in a month when you have only been exercising mildly, have been sleep-deprived, and spent most of your time sitting on the couch pinned under a baby watching everything Netflix can offer….well… that’s pretty damn good! Also, if I lose 4.5 lbs a month for the next 10 months until Ellen’s first birthday, I’ll more than meet my pre-Lewis weight goal. Of course, I don’t expect to lose 4.5 lbs a month every single month, but that thought process put it all in perspective, and now I’m very pleased with myself!

One thing working against me is my insatiable appetite. It isn’t every day, but some days I am a bottomless pit. Today is one of those days! I just ate a huge plate of pierogies and roasted broccoli and as soon as I ate the last bite, I was having visions of pizza. My stomach is rumbling even though it is full of lunch. Days like this are a battle between listening to my body and trusting it, and knowing without a doubt that my tummy is way more full than my body is recognizing.

Side note – Lewis is also starving lately! My little boy who used to eat almost nothing is now eating full adult sized meals and then asking for more food an hour later. He also keeps telling us that his legs “have a tummy ache”, which we think just means they hurt. We suspect growing pains. But he also tells us he has real tummy aches all the time, too, which we have mostly been able to solve with more food. We measured him the other day and he seems to have grown a couple inches taller in the last couple months! We’ll get the official stats in about a week at his 2.5 year checkup.